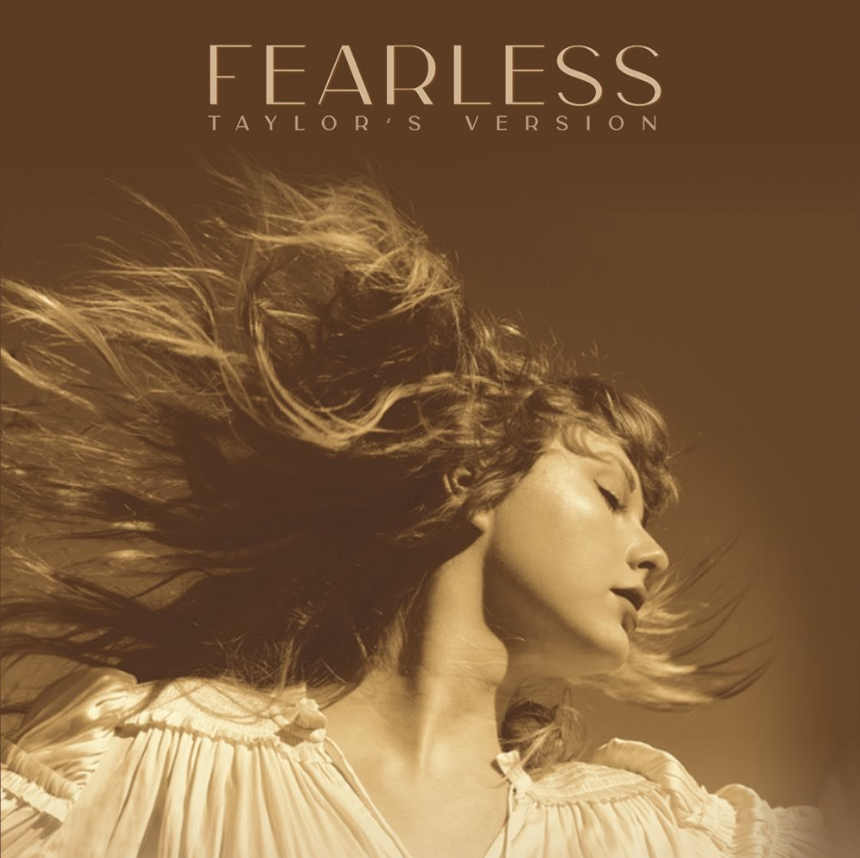 Pictured above is the album cover of Fearless (Taylor’s Version) (TheDailyAztec).

Young artists often get taken advantage of in the excitement of being discovered by agencies. Taylor Swift was one of them. Swift released six albums with Big Machine Label Group, and at just 15 years old, Swift allowed Big Machine to own her master records. After learning that Big Machine sold her music and the company to Scooter Braun, she posted on “Tumblr” that “[f]or years I asked, pleaded for a chance to own my work. Instead I was given an opportunity to ‘earn’ one album back at a time, one for every new one I turned in.” The “opportunity” she is referring to is a deal that Braun offered her to release an album in return for ownership of the other albums she created and released. Swift found out about the change in ownership of her albums when it became public news; she was never personally informed (Rolling Stone). “Owning Taylor Swift’s masters means the owner will now profit from every stream and sale of Taylor’s albums and songs” which is clearly unfair and unethical (RepublicWorld.com).

This year, Swift released Fearless (Taylor’s Version) where she rerecorded her songs from her original 2008 album Fearless so that she could rightfully own her own music. Not only did Swift feel empowered as a result, but she also inspired her fans to stand up for themselves and take charge of the parts of their lives that they want to change. In Swift’s case, that was the right to own her music.

Choir and orchestra teacher Mr. Salisbury shared his input on why Swift’s choice was so influential. Mr. Salisbury points out that music has shaped public opinion for centuries and often highlights societal issues and common struggles that most people endure. It is a “fundamental part of human expressions” which “is impactful because words are and singing them adds another layer of complexity.” People, no matter their background or situation, “relate strongly to the human voice.” Mr. Salisbury believes that “we are all just looking for something to relate to. We want to find someone that feels what we feel and says what we’re thinking. People gravitate to those who do that effectively. Speaking is one thing but art is a statement.” Mr. Salisbury encapsulates the feeling most Taylor Swift fans, or listeners in general, felt when Fearless (Taylor’s Version) was released. A top tier celebrity and role model to mainly young girls fighting for herself was incredibly motivating to witness. I am personally inspired by her strength and endurance in what I imagine was a very aggravating situation. Even though most do not understand what it feels like to experience your work being manipulated like Taylor did, being taken advantage of in the music industry is unfortunately a common experience.

Madison Elliott, a Ramapo junior and Taylor Swift fan, shared her insight on Fearless (Taylor’s Version). “I was so happy when it came out, as I was looking forward to it for the longest time since she announced it a few months ago. It was all I was listening to for weeks and still today. It just brings me back to her first Fearless album, which I listened to when I was younger. It brings back such good memories. I love Taylor Swift and so many of the songs I was obsessed with when I was a kid have come back, which is just amazing. I feel like I’m a little kid again. It puts me in such a good mood and radiates good energy in general.” Clearly, Elliott regards Swift’s release of Fearless incredibly well. Not only was the album empowering, but fans, like Elliot, feel nostalgic because of Fearless (Taylor’s Version). It is truly amazing that music can be so impactful to fans and bring out the best in them.

Swift has left people feeling happy, inspired, and emotional during such a stressful time. Fearless (Taylor’s Version) has enabled fans to remember simpler times pre-pandemic and regain that feeling of hope that they had before COVID-19. Music has a profound impact on people, which is intensified in situations like Swift’s. Her audience was able to find positivity because of her album, which is the goal of any creator at the end of the day.