Afloat in a Sea of Secrets 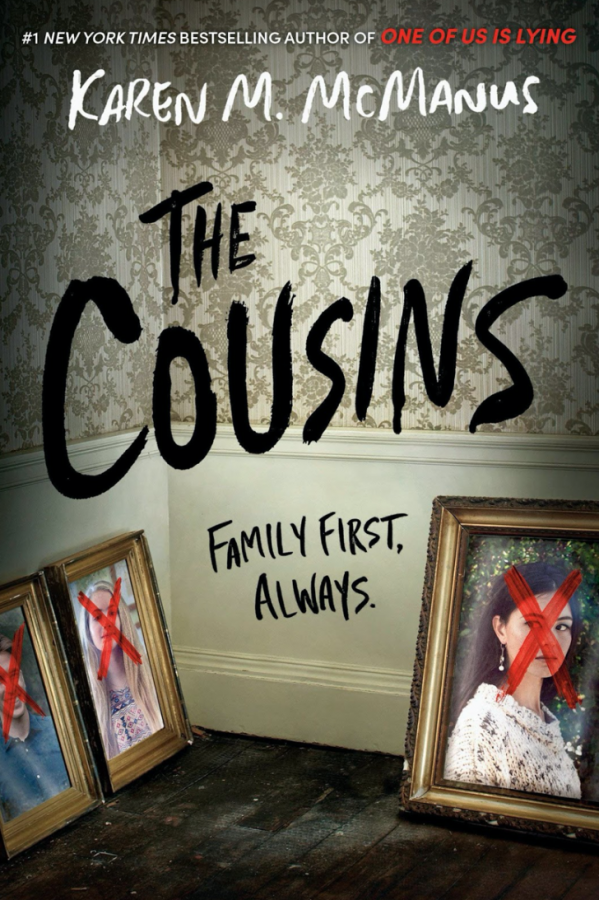 This photo shows the cover of The Cousins by Karen M. McManus.

How do you stay afloat in a family drowning in secrets?  Karen M. McManus’s long-awaited young adult mystery, The Cousins, follows alienated cousins, Milly, Aubrey, and Jonah Story, as they attempt to unravel the gripping mystery which is their family history.  Shocked by the arrival of a letter from their estranged grandmother, the cousins are invited to work at her luxury resort on Gull Cove Island in Massachusetts.  Their parents, desperate to regain their mother’s goodwill, insist on the teenagers’ attendance; bombarded by a mixture of curiosity and resentment, the cousins set off to meet the woman who has been draped in tales of glamor and mystique since their birth.  When they arrive, it becomes clear the Story family’s mysterious past has come back to haunt them; Gull Cove Island is not nearly finished with the Story cousins, and neither is their grandmother.  If the cousins want to survive the summer, they must unbury the hidden secrets their family left behind.

Well known for her other bestselling young adult mysteries, One of Us is Lying, One of Us is Next, and Two Can Keep a Secret, Karen M. McManus has a knack for captivating plots and astonishing twists.  According to megs_bookrack on Goodreads, “As to be expected with a novel by Karen M. McManus, this was full of twists and turns the entire way through.  The over-the-top drama was compelling, and I was so into finding out all of the Story family’s deepest secrets.  There was a lot to unpack” (Goodreads).  Teeming with intriguing and magnetic personalities, McManus’s novels expertly weave unique, blossoming relationships into rousing situations.  Adept at creating surprising bonds between characters, McManus is notorious for friendships worthy of The Breakfast Club, and her newest novel is no exception.

Rotating between four perspectives, three taking place in the present-day and one in 1986, The Cousins is a thrilling tale of suspense, love, secrets, and murder, deserving of four out of five stars.  Published in December 2020, The Cousins masterfully illustrates the dangers of keeping secrets, particularly through the perspective of Allison Story, Milly’s mother and the 1986 perspective of the novel.  Burdened by the death of her father and the unexpected consequences of her actions, Allison struggles to keep a barrier between herself and those who could help her, hiding behind the figurative veil she believes will protect her.  In the process, Allison pushes away her loved ones, bringing only misery in her attempt to hide her mistakes.  Her unwillingness to open up has dire effects on her mental and emotional state of mind, even going so far as to alter her personality.

The Cousins also touches on the domino-effect of one’s actions and their consequences on others.  Allison’s blunders, as well as her siblings’, eventually have devastating consequences, which continue to torment her as an adult.  The resulting events change the lives of not only Allison, but also her mother, siblings, and fellow islanders.  The residual ruin even goes so far as to threaten the lives of the next generation.

While dealing with the repercussions of the Story siblings’ actions, Milly, Aubrey, and Jonah bond over shared secrets, family drama, and small-town tragedy.  Riveting in its development of the group’s relationships, The Cousins superbly emphasizes the importance of friendship and trust.  Amidst an assault of emotions, puzzling discoveries, and shocking revelations, Milly, Aubrey, and Jonah are able to find solace in their budding friendships, keeping them from slipping into a spiral of despair.

The strength of the Story cousins and their capacity for seeking the truth, no matter how monstrous, is an inspiration.  A prevalent topic in the novel, truth is something all people desire, but most are too afraid to seek out.  Many fear what they will find on the other side of the curtain, so they do not look.  They keep it in the back of their minds, hidden from view, hoping it will simply disappear, or someone else will take on the burden for them.  Through determination and courage, Milly, Aubrey, and Jonah overcome this fear and embark on an exhilarating, yet terrifying, journey to uncover the truth, no matter the cost.  Not only does their search result in success, but it also leads to fascinating growth among the characters.

With the purpose of emphasizing the significance of family, McManus succeeds in highlighting that, despite rivalries, secrets, and distance, those who matter most must always come first.  Regardless of disputes, forgiveness should always be sought from family; missing your chance to do so will lead to eternal regret and unresolvable pain.

Perfect for mystery lovers and fans of E. Lockhart’s We Were Liars, McManus’s The Cousins is appropriate for both teenagers and adults.  The combination of its original, unpredictable plot and authentic characters against the backdrop of the stunning, yet tragic, Gull Cove Island, makes The Cousins a must-read which will leave you breathless and desperate for more.