Biden’s First Month in the Presidency 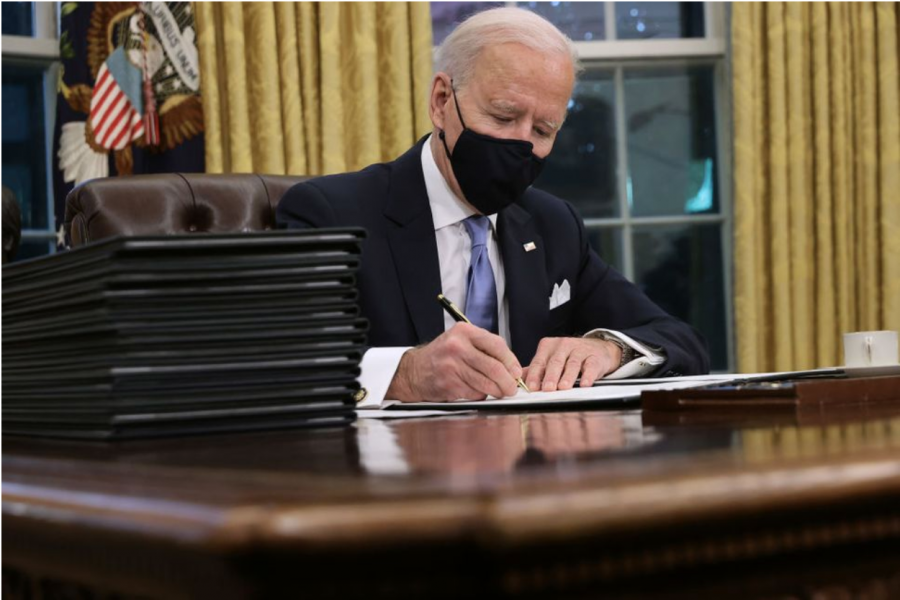 Photo Courtesy of US News

The United States officially has a new commander in chief. On January 20th, President Joseph R. Biden was officially inaugurated and sworn in as the 46th president of the United States. And his first month since being sworn in is crucial for setting the tone of his presidency. In a Gallup Poll conducted from January 21st through February 2nd, Biden had a job approval rating of 57%, 37% disapproving, and 6% without an opinion (International Business Times). But aside from numbers, what has the potential to be more revealing is the legislative and governmental actions being perpetuated by the Biden Administration.

To begin, the topic overwhelming all American minds currently— Covid-19. Vice President Kamala Harris said the Biden Administration was “starting from scratch” in terms of developing a national vaccine distribution plan (New York Post). During Biden’s first town hall as president, he also claimed that by the end of July vaccines would be widely available for the majority of the American public, around 300 million people. Moreover, Biden put into place an executive order to increase the number of eligible vaccinators, to thereby increase the overall availability of the vaccine. He has involved the national guard and military personnel, while also allowing retired doctors and nurses to distribute (CNN Politics).

Biden is also currently trying to pass his 1.9 trillion dollar coronavirus relief package, also known as the American Rescue Plan (New York Times). Under this bill, the House would provide direct payments of up to $1400 per person. It would also extend the 15% increase in food stamp benefits through September, instead of June. Furthermore, the legislation would send about $19.1 billion to state and local governments in order to cover back rent, rent assistance, and utilities for any at risk, low-income households containing those who are unemployed. There is also the increase of a 15 dollar minimum wage by 2025 included in the bill (CNN Politics). This bill is facing a large amount of resistance from Republican congress members, which could prove problematic for Biden’s goals for obtaining bipartisanship.

When asked how she felt about Biden’s Covid progress thus far, Gaby, a junior at Ramapo, stated that she thinks, “Biden is doing a great job handling Covid, as he got right to work the minute he was inaugurated and is addressing every issue occurring right now.”

Finally, President Biden has also passed numerous executive orders that do not pertain to Coronavirus. He signed a proclamation ending the ban on those entering the United States from seven predominantly Muslim countries that President Donald Trump put into place during his presidency, as well as pulling funds from the building of the border wall. President Trump also removed the United States from the Paris Climate Change Accord, combating global warming and limiting global carbon emissions, which Biden originally signed an executive order to rejoin, and we just recently succeeded in rejoining. He also signed an executive order prohibiting discrimination based on sexual orientation or gender indentity (NBC).

Another student at Ramapo stated that while she appreciates “that Biden is focusing a lot of his time and attention on getting Covid under control right now [she] also [wishes] he would focus a little bit more on some of these other issues such as the conditions children are living under at the border.”

Going forward, only time will tell whether or not these actions Biden is putting into place will have a real effect. But in his first month, he has set his priorities and is working to fulfill his duties as President of the United States.