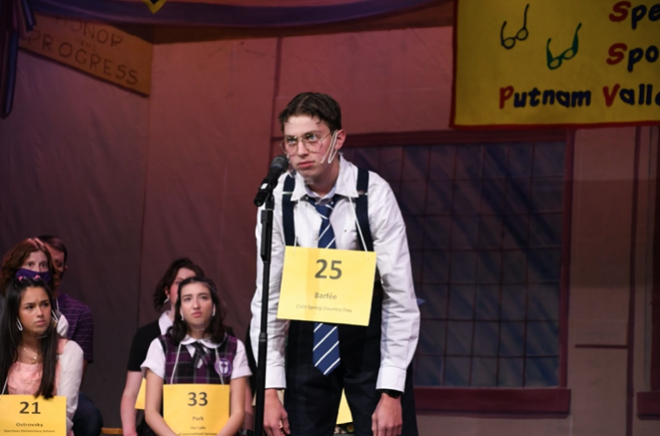 LUGUBRIOUS! Henry enjoys the lights as he rocks the stage as Barfee in The 25th Annual Putnam County Spelling Bee! (PC: Sophia Katsouris)

From as long ago as he could remember, senior Henry Martin fell in love with the art of theater. As a leader of Gold Masque, Ramapo High School’s drama club, Henry has not only performed in every Gold Masque production since his freshman year but has also been a big part of Gold Masque’s Student Advisory Board. He remembers going to various Broadway performances with his grandma, and wanting to be just like the stars on the Broadway stage. Throughout his high school years, Henry has become an important figure in Gold Masque, and has grown significantly as a performer.

After participating in theater productions in his elementary and middle school years, Henry knew the day he got to Ramapo that he wanted to be a member of Gold Masque. His first steps on the Ramapo stage was a bold one, beginning as Phyllis in the play Sylvia, a female socialite. Dressed head to toe in a dress and high heels, Henry made the jump into Gold Masque with a gender-bended role. Although he was nervous to perform as a traditionally female role, he went in with confidence and had a positive debut. After his initial step into Gold Masque, Henry played the alter boy/bartender in the spring musical, Sister Act. Henry’s first year in Gold Masque really made him feel like he found his place in the school!

Transitioning to his sophomore year in Gold Masque, Martin played Lost Boy #1 in the play Peter/Wendy, as well as Ziggy in the musical, Young Frankenstein. Henry continued with Gold Masque his junior year, playing Scoop in The Heidi Chronicles during the fall play. Henry was set to play Hart for the spring musical 9 to 5, but it was unfortunately cancelled due to COVID-19. Henry has a special place in his heart for his role as Scoop as he says, “It was the first real complex role I played. Scoop was a narcissist, and I hadn’t played a role like that before. It helped to break me out of my comfort zone.”

He rounded out his high school experience by playing Wadsworth in the virtual fall play Clue, and playing William Morris Barfee in the spring musical The 25th Annual Putnam County Spelling Bee. According to Henry, Putnam was his favorite musical to be a part of, as well as one of his favorite roles to play because of how out of the ordinary the character was. He ended off his year being nominated for a Montclair State Foxy Award for Outstanding Performance by an Actor in a Virtual Play (Limited Editing) as Wadsworth. According to Bryan Fortunato, one of Henry’s Gold Masque peers, “Henry has been a great leader to Gold Masque and we are all going to miss him so much next year.”

Aside from being on the stage, Henry also participated in many other activities during his four years. He was on the yearbook committee this year, participated in and directed the Holiday Festival show, was a member of Relay for Life, and was also the president of RAALC. Aside from his extracurricular activities, Henry also loves hanging out with his friends, whether they are in Gold Masque or from the Ramapo student body.

Henry will always cherish the memories he made during his four years in Gold Masque. He is so thankful to have been able to perform, and explained during his interview that “playing characters that are so different from myself for an audience is an unforgettable and life-changing experience.” Henry will be attending Bucknell University in the fall, but he is so glad he got to be a part of all the opening nights, late-night rehearsals, and Gold Masque hangouts. Although Henry may not be here next year, he will be a part of the Gold Masque family forever. Go Bisons!